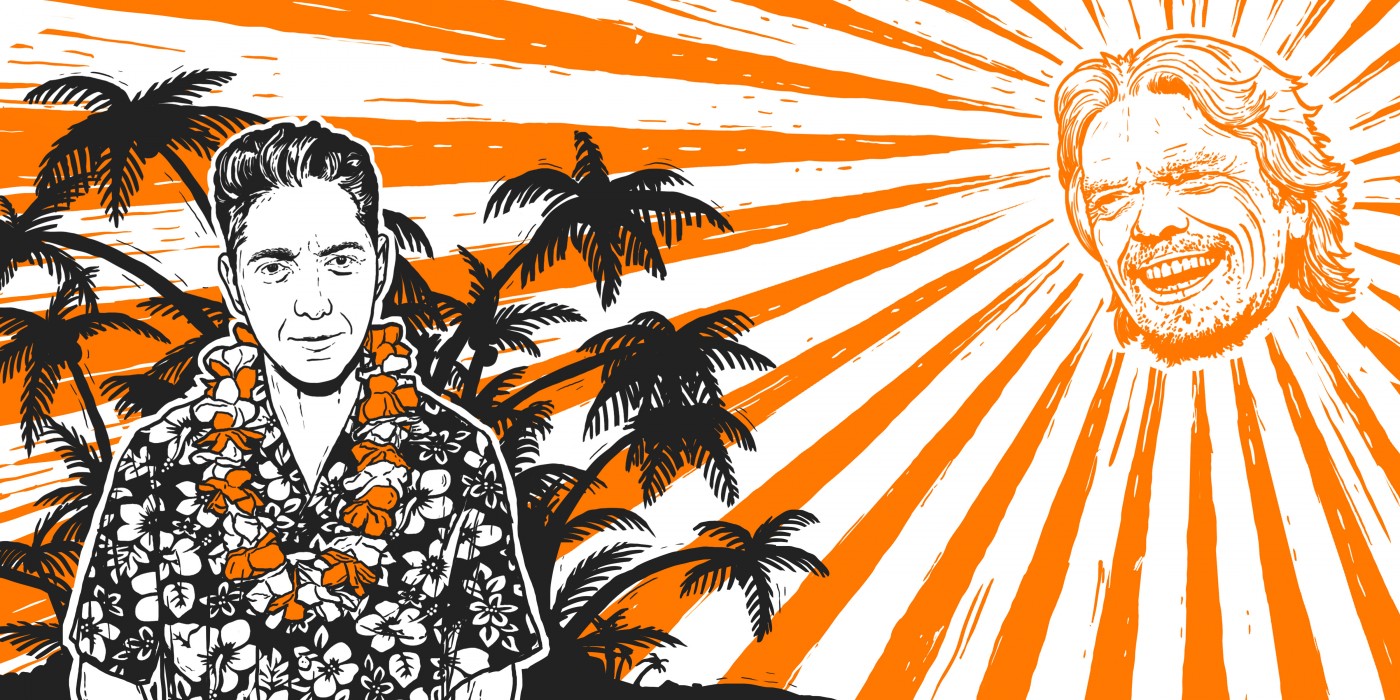 The Chosen one of the Caribbean

Hannes Grassegger is a chosen one. As a journalist and book author, he was part of the illustrious circle of bankers, bitcoin-potentates and billionaires, whom Virgin-Boss Richard Branson invited to his private island. In the Caribbean they aimed to “define the future together” – not their private, but the future of all of us, of course. Hannes published an article about this in “Neon”. What we are interested in, is what else has been playing off on that Caribbean island.

You were in the cursed Caribbean with Richard Branson and his buddies. What of this visit will remain in your memory for a long time?
Hannes Grassegger: I was at Branson’s home, on Necker Island. A tiny island at the very edge of the Virgin Islands, approximately on the same level as Jamaica. One could say: his main residence, but this is exactly what he is trying to avoid for tax reasons. That is why Branson has a number of homes. Just that he can’t stay at any one of them for too long, otherwise he would be declared a taxable resident. The capital must keep moving, baby! A tax declaration can go wrong in many ways. No one knows how rich Branson really is. There are even people who claim that he barely has anything.
Branson lives in the mother of all tax havens. I will remember the thousands of numbered blue lockers on the main island of the British Virgin Islands (BVI), in Tortola. Those are the legendary “letterbox-companies”. The BVI are the global market leader for offshore companies, of which nobody knows whom they belong to. I went into such an agency near the marina, where one can register such “letterbox-companies”. This is actually pretty easy. A couple of signatures and around 1000 Dollars are enough and whoosh – already you aren’t paying any taxes.

Were any specific steps agreed on at the end of the “Block Chain Summit”, or did it all end with the presentation at the edge of the pool?
Here, a group of people got to know each other, people who actually really work together now. For example the Wall Street Journalist Michael J. Casey, who was booked as a presenter, took his chance to join in Brian Fordes newly founded Digital Currency Initiative at M.I.T. The goal is to promote a Pro-Digital-Currency-Agenda, together with the Peruvian star-economist and George W. Bush’s role model Hernando de Soto, who also came to the island. An idea like this was born on the island during cocktail hour at one of the bars, for example.

In your story, you let decadence paired with unworldliness flash through the protagonist here and there. How did you feel in this elitist circle on the island?
Absolutely at home.

Which of the Definers-of-the-Future present, sincerely impressed you above all others and why?
Oh there were many. Hernando de Soto is a real person of power. The guy is used to getting corrupt autocrats to agree to his line of action. Paul Brody, the previous head of the Internet of Things at IBM is super smart. He could tell extremely catchy stories best, ones that you have to pass on. Then there was an impressively competent, very quiet IT-lawyer, Margo HK Tank. And a stunningly hot Bitcoin-bee, who is in charge of the Coin-Telegraph. She looked like Bugs Bunny’s beloved one. Branson himself is an excellent listener. In any case, all of the people there were good listeners. I think this really takes you places.

Why wouldn’t you trust these people under any circumstances in the future?
Careful – suggestive question…

..That’s all right.
Hey, we have fought hard for democracy for the past few hundreds of years and won it. Something like this is a tender plantlet. Our mission is to bring this democracy into a globalized age, instead of letting it get snatched away from us.

What has this Block-Chain-Circle around Branson, on the other hand, understood better than the politicians?
I was impressed by the e-ciggies with the liquid marihuana. It’s about implementing new technologies for very practical needs. For everyone’s benefit.

Which role does the money factor play in the digital future, where one good idea, a computer and a programmer should suffice to unhinge the world?
The new capital of the digital age is my personal data. I wrote a short book about this: “I Am The Capital”.

What has to happen so that each and every one of us can profit from the digital future?
We shouldn’t let the digital scaredy-cats spoil our mood. The future can be wonderful. As long as our data belongs to us. Otherwise it will be hell.